They say the best things in life are free and when it comes to visiting Ghana, I would say that is possible to view some of the fascinating aspects of the country – without spending a fortune – and still learn about her heritage, and cultures.

Below is my list of top tourist attractions that may go unnoticed for those living in the villages, towns and cities and going about their everyday lives. Nevertheless for me, these places have come to be as engaging as the formal tourist attractions known in the country.

If you’re anywhere near 37 Military Hospital, Accra you’ll hear their chatter before you see them. These bats have made the trees around the military hospital their home and with them comes their noise and droppings.

They are a sight to be seen, particularly when they are in mass flight.  I know this because I have a colony of bat neighbours that keep me awake at times. One hangs upside down on an electricity wire outside my house where (s)he was electrocuted.

I don’t mind them. They may have stripped the branches of the tree they live on bare but they don’t cause me any trouble. They act as my clock because I know that when it hits 5.30pm, they will be coming to chill on the tree, after a hard day’s chatter at 37!

Others, however, view them as a nuisance. In 2002 and 2005, the military forcibly removed them because of their noise and droppings. These furry fruit-eating creatures returned weeks and months later. They are a hardy bunch. Their droppings – it turns out – are known as guano and contain a good source of nutrients that farmers use as fertilisers.

Look out for them in your adventures through Accra and across the country too. They are known to be a bit of a delicacy in soup in the Eastern Region and have been sighted in their millions at the University of Energy and Natural Resources in Sunyani, according to Enoch Darfar Frimpong in the Graphic Online.

…..And if you go to Elmina Castle, you might see another colony that moved into one of the castle cells. When I visited the slave dungeon in November 2018, the tour guide said some believe the bats are the ancestors returned. You can learn more about the bats here.

Art is in every corner of Ghana but the emergence of graffiti art has really caught my attention. I’ve seen some beautiful images under the Nsawan-Kumasi flyover in Mile 7 which were captured in a documentary called Africa Riding featuring skateboarders. There is also some on the way to Tosway Hotel featuring a mural dedicated to Sky Girls – a movement designed to promote the empowerment of young women.

But my all-time favourite collection of images has to be in the Ussher Town and Jamestown areas of Accra. These old districts are like a living museum that weaves together colonial edifices, including slave forts, with the contemporary images of modern Ghana – seen through the optics of talented artists. Go to Brazil House and you’ll see a selection of murals painted by artists connected to Chale Wote – the street art festival staged in Jamestown in August.

This area is close to the Estate area of Koforidua and is next to a gated park, which I am told it is part of a research agriculture research centre. There are no signs to let you know you’re in the right spot but the flower garden is a few feet from the park and the smell of the flowers lets you know you’ve arrived. The flowers bloom from trees in the area and are so powerful it smells like the whole area is perfumed. It would be a perfect place to get married in or have some official ceremony – if only smellovision had been created – you would know what I mean!

This partly deconstructed edifice is situated next to Brazil House between Ussher Town and Jamestown. I am told that this Lodge was used to pick and sell our enslaved ancestors so you would find merchants coming to this spot to buy back in the 1800s. The building has crumbled a bit but this has not affected its function. The venue has become a destination point for tourists, musicians and other entertainers are commissioned to perform there.

The towns of Nusano and Katanga and the village of Asukawkaw lie near the Nkwanta-Kpando Road in the Krachi East District of the Volta Region. Since about 1933, these settlements used the bartering system of exchanging goods (mainly foods) in the absence of money and this continues today. My mum visited all three towns with her Voltarian friend in 2018 to shop, and chat with the local people.

The innovative mode of trading was driven by poverty and allowed people to access more expensive foods, such as meats, in exchange for staples such as plantain, palm oil, palm nuts, and bananas. The trade still continues today because there are people who can’t afford to buy meat the conventional way.

Nsuano (which means estuary) is a big market where meats are exchanged for other foods every Tuesday, while in Kantanga – a smaller market – staples are bartered every Thursday. The village of Asukawkaw takes its name from the Asukawkaw River (which means red waters). The Asukawkaw village was chosen as a settlement for the people of Akroso who were moved from their original location so that construction could begin on the Akosombo hydroelectric dam at Lake Volta, led established by Ghana’s First President Osagyefuo Kwame Nkrumah.

Around 700 villages were relocated into 52 resettlement sites two years prior to the lake’s completion* and those resettled tended to be subsistence farmers or riparian fishermen – those that fished by the river bank. I learnt this fascinating information from my mum who was told that the resettlement was also aimed at improving people’s homes, which prior to the move were dilapidated.

*Zakhary, K. 1997. Factors affecting the prevalence of schistosomiasis in the Volta region of Ghana. McGill Journal of Medicine 3: 93-101.

This gallery is situated on four floors, including the ground floor, and features some of the most impressive collections of ancient and contemporary art in Ghana. Owned and managed by super friendly and one of Ghana’s leading artists Professor Ablade Glover, the gallery features art from mainly Ghanaian and Nigerian artists. You will find everything from Asafo flags with appliquéd and embroidered symbols to full-sized coffins in the shapes of crabs, running shoes and eagles.

This is a space where work from established artists such as Owusu Ankomah and George Hughes sit alongside emerging talent, as well as pieces by Dr Glover himself. For me, this space is an under-utilised gem and is completely free to visit. You will find everything from market, rural and urban scenes displayed in the gallery along with politically satirical pieces. Click here for more: https://www.artistsalliancegallery.com

This recommendation comes from Wanlov the Kubuor, who was interviewed by Tash Morgan-Etty in the Time Out Accra 2017/2018 edition. This place houses a big lake and micro-forest which he describes as having strange tall, thin trees, but being very unique and with a beautiful view.

Said to be the biggest mosque in West Africa, the Ghana National Mosque is a magnificent edifice that anyone travelling around the Kanda area will notice. 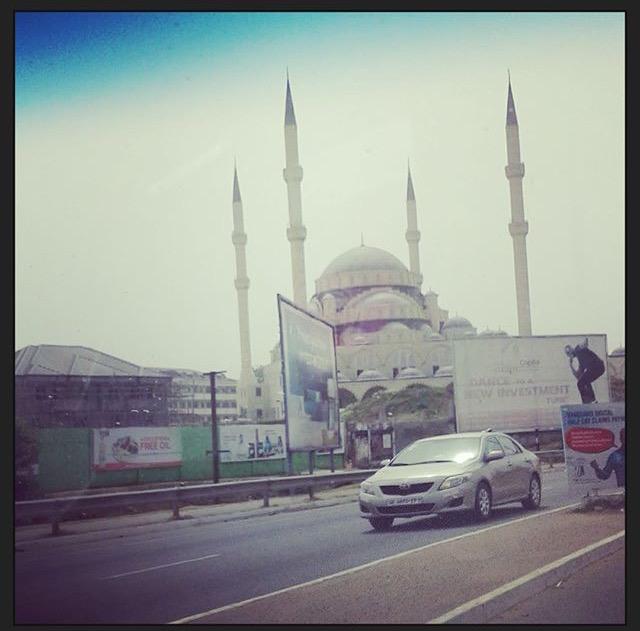 The architecture is inspired by Turkish design and was funded by the Turkish government. The main sponsor was an NGO called the Human Development Association International (HUDAI). The building has an expanse of 4,000 square metres and can house around 10,000 worshippers. The design, materials, and workmanship were mainly sourced from Turkey but were supplemented with Ghanaian manpower. The mosque was opened in 2016 and includes a library, senior high school, cultural centre and national chief Imam’s villa. Make sure you take a look inside.

It was estimated to have cost around US$12 million, said Awal Lawal, the assistant general coordinator of HUDAI. Other sponsors were The Ghana Solidarity Friendship – sub-committee of HUDAI, Office of Chief Imam, Ministry of Religious Affairs.

Travel instagrammer @enyobruku gives us a tour of the inside of the mosque here.

All comments are welcome on this page. If you are having trouble posting on the Google+ page, please share your views via Facebook here or tweet @MisBeee

Please be aware that you may not reproduce, republish, modify or commercially exploit this content without our prior written consent.