I had my reservations about watching Gold Coast – a film inspired by the Danes and set along Ghana’s idyllic coastlines.

The 2015 film, written and directed by Daniel Dencik, is a depiction of 19th century life three years after the Trans-Atlantic Slave Trade was officially but not totally banned in 1833.

Slavery was finally abolished in Danish colonies in 1848, according details from the BBC.

Undoubtedly my concern was how the film, which was co-produced by Ghanaian film-maker Kwame Boadi, would portray this sensitive and brutal practise of African subjugation for economic gain. And I was not sure I wanted to relive that sense of horror again.

I say ‘again’ because as a teenager, visiting one of the very castles that formed the backdrop to the film, left a lasting and palpable impression on me. I had walked those same steps the actors walked on the Elmina Castle grounds. I stood in the holding prisons – the last point of no return – where my countrymen and women stripped of their clothing and dignity languished before being shipped off the New World.

And to this day, I can still smell that acrid mix of sea water and something deathly that enveloped the walls of those prisons and hung in my clothes for days after the visit.

Gold Coast is the story of one man Wulff Joseph Wulff, a Danish botanist who leaves his fiancée in Denmark to establish a royal coffee plantation at the request of Danish King Frederik. Although in reality Wulff existed and visited present-day Ghana around 1836, his character in the Gold Coast is an amalgamation of three Danish men of history with some embellishments.

Denmark had had a physical presence in present-day Ghana since the 1650s, trading brandy and gunpowder in exchange for human cargo destined for the New World. The country even claims to be the first in Europe to have officially banned the barbaric trade in 1792.

Although Trans-atlantic slavery continued unofficially, the Danes attempted to diversify by keeping enslaved Africans on their own soil to help cultivate coffee plantations.  These efforts however were largely unsuccessful and financially unprofitable, and Danish forts eventually succumbed in 1850 to the ownership of the British.

This arty film draws us into an almost coming of age sequence in which the central character – Wullf – undergoes a process of initiation. He moves from an innocent with high hopes of taming the wildlife and ‘wild’ ‘life’ to one where he is forced into the realisation that his efforts to stop slavery are inconsequential. He is portrayed as the quintessential hero. Strikingly handsome, fearless and – compared to his peers – relatively liberal-minded for the time. But while he has no qualms about cuddling a little black girl lost in the forest or carrying a drowned slave washed up on the beach, he sees nothing untoward in professing that: “the [local] population does not measure up to the forest that surrounds them”.

The Gold Coast film, for me, was an assault on the senses – brutal and beautiful, excessive and lacking, authentic and yet contrived. These dichotomies play out throughout the film, spilling out even after the final frame has ended.

We are greeted with beautiful scenes of lush vegetation, exotic flowers and insects, and the grandness of ancient trees. But these gifts of Mother Nature are just one side of the coin. She is also the harbinger of disease and death. Avid botanist Wulff is transformed from a white robed, clean complexioned individual to one mentally and physically ravaged by the Ghanaian heat and environment. His leg succumbs to a worm-like parasite and in one close-up scene we watch as pus oozes from it.

The employment of light and dark, and black and white are also striking. We cut between soft, romantic scenes in Denmark where Wulff and his fiancée – alabaster in colour and attire – tenderly caress and make love. But by the time Wulff has immersed himself in the wildlife of the Gold Coast, his complexion and clothing have browned. In one scene the camera tricks us into thinking the browned legs we see are that of a ‘native’ when in fact as the camera pans higher, it is Wulff’s pale chest that appears.

This interplay with colour and shade is rampant elsewhere in the film and wildly symbolic. Locals wear very little and what they do wear is muddy in colour. The European women, who number two in the film, are fully clothed in white, while there is an almost constant gratuitous intrusion when it comes to female black bodies. These women within the castle walls are used to satisfy the carnal pleasures of the Danish officers and so are generally naked, breasts exposed or clothed with neck and waist beads. Only those under the auspices of the missionary couple – generally children – are dressed head to toe in white.

I was told the contrasting use of black and white and the accompanying symbolism associated was incidental and rather an attempt to stick to historical accuracy. But in so doing, there is also a reinforcement of tired-old stereotypes common when exploring slavery. These include racial superiority and the lack of censorship when it comes to black bodies.

I think the most telling scene for me was when the pre-pubescent slave boy Lumpa, who becomes Wulff’s companion and later saviour, transforms from a mute character clothed in white European garb to one dressed in traditional Ghanaian attire …and finally speaks. Lumpa rescues Wulff from the castle’s prison and transports him to a far-away village where he recounts his story in the Akan language Twi to the village elders. Incidentally, in this village, the women are clothed!!!!!

This wordlessness is a common theme throughout the film. Locals rarely volunteer to speak but respond when summoned to or react through gestures. Even Lumpa does not utter a sound when he is fiercely whipped for stealing. Shortly before the punishment is meted out, we hear the officer announce: “the Negro is unable to feel pain”, as if to limit the terror in Wulff’s eyes.

It had been argued that this use of silence was important in highlighting the power of the individual and the unspoken word. But for me, it was difficult to align this sense of stoicism with this voicelessness which pervades the film. Even the archetypal villain Hans Richter – the black slaver and free man – had limited dialogue. And the Asante men in horseback, who come to destroy Wulff’s plantation, seem to mumble their words fairly inaudibly.

Instead, I felt a strong sense of alienation which continued even when Lumpa finally vocalised his thoughts. The dialogue in Gold Coast is predominantly in Danish. Subtitles are provided for the English audience. And yet, the audience – if not conversant in Twi – would have no clue of what Lumpa said. Maybe that requirement was an unnecessary extra. Afterall, Lumpa, the forest, the naked men and women, the beach scenes, the flowers were as ornamental as the castle itself. They were there to illuminate the mental and physical journey of Wulff Frederik Wulff.

Gold Coast premiered in Denmark in June 2015 to rave reviews. It also had the effect of shocking audiences some of whom were unaware of Denmark’s murky past. It airs in London until Thursday 15 October 2015 12:00 at Vue West End Cinema. Screenings then move on to various countries across Europe, and Australia. It is due to air in Ghana in early 2016, and is likely to be screened in many other African cities thereafter, Kwame told MisBeee. 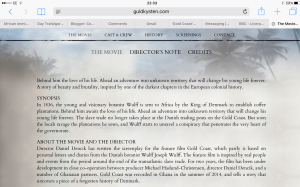 Although funded by the Danes, the film is supposed to be a collaboration with Ghana. Around 400 Ghanaian extras and seasoned actors including Fred Amugi, Akofa Edjeani-Asiedu and Wakefield Ackuaku were critical in making the film, according to Ghana’s ‘Graphic Online’.

And yet aside from the film credits, I have seen no mention of InGenius Africa director Kwame on the official Gold Coast website or in the marketing material for the screenings.

Kwame is best known for such productions as Sun City and Abiba in Ghana. But his contribution on the Gold Coast website is summed up as: ‘a close co-operation between producer Michael Haslund-Christensen, director Daniel Dencik, and a number of Ghanaian partners.’

It will be interesting to see what Ghanaians and other Africans in the diaspora make of this film.

* Gold Coast was filmed at a number of castle locations in Ghana including Cape Coast and Elmina. This image was taken by Emmanuel Ackroh and supplied by Ben Adarkwah.

The Chronicles of Odumkrom: All the drama of Shakespeare brewed in a Ghanaian pot

My hero: the slave

Review of N: The Madness of Reason – a Film Africa London Premiere

Belle: a new kind of rose

A Film Review of Stranded in Canton

All comments are welcome on this page. If you are having trouble posting on the Google+ page, please share your views via Facebook here or tweet @MisBeee

Please be aware that you may not reproduce, republish, modify or commercially exploit this content without our prior written consent.