Misdiagnosis delayed one London-born teenager’s treatment for Asperger Syndrome by 17 years until a chance visit to a doctor in Ghana changed her life for the better. 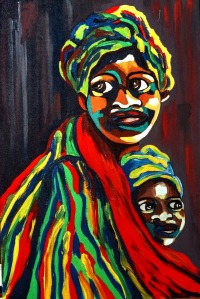 “Ann-Marie was born in 1998 and she was always an active and alert baby. I remember my aunty commenting on it,” her mother Jayne said. “But I thought that was positive.”

At six weeks old, Ann-Marie stopped sleeping in the afternoon and it was increasingly difficult to keep her still. As she grew older, her behaviour became more unusual.

“I remember on her first day at nursery, her teacher asked me if she had sight or co-ordination problems. My husband and I had her assessed but she didn’t.

“By the time she was four years old, her cousin, who was also her best friend, left the nursery. That was the first time that I saw that she struggled. She wasn’t sleeping well at night and would wake up and stand at the foot of the bed and ask: ‘did I do something wrong, why can’t I play with my cousin?'”

In hindsight, I see that children on the autism spectrum like routine and Ann-Marie’s behaviour was because her cousin’s departure broke the routine,” said Jayne.

As Ann-Marie’s headed into her early teens, her behavioural issues became even more pronounced. She was bullied and started developing suicidal thoughts after being hit by a car. It was then that she was referred to children & adolescent mental health services (CAHMS).

Still Ann-Marie’s behavioural issues spiralled. She played truant from school and on one occasion, left her classroom in the pouring rain and stood in the playground. She had to be sent home because she was soaking wet. Jayne eventually put her career in consultant training and education on hold to care and home-school Ann-Marie.

Turmoil within the family did not help either. Jayne and her husband divorced and his move to Ghana hit Ann-Marie hard. Then Jayne’s father died in 2010 when Ann-Marie was 11 years old.

Unusual behaviour
Despite people picking up on Ann-Marie’s unusual behaviour, Jayne could not see it. “Relatives used to comment that she spent too much time on her own in her room. But I thought it was normal behaviour for a teenager, particularly after her grandfather’s death.” she said. “It was only after I went to a CAHMS meeting and could observe her in a neutral environment that I saw her symptoms being displayed,” said Jayne. “When you live with somebody, you talk to them – you don’t sit and watch them. So when I saw her in that setting, it broke my heart because I just didn’t know.”

Things came to a head when 12-year-old Ann-Marie unexpectedly left the house one night and jumped on a bus. Luckily, a cousin noticed and alerted Jayne in time so she could find her. “I remember when I found her, her left leg was jerking and she kept repeating: ‘You can’t scare me.’”

Incidents as heart-stopping as this for any parent, were fortunately not common for Jayne. But the situation made her realise just how circumstances can change in a flash. “In 1998, I had a career, I was earning good money, I had two healthy children, I was married and I was comfortable.”

Jayne’s frustrations mounted because she still had no diagnosis for Ann-Marie so she decided to take time out with her and visit family in Ghana.

“A friend whose mum had mental health issues recommended visiting a psychiatric doctor at North Ridge Clinic in Accra ,” she said. “Dr Sammy Ohene assessed her based on her symptoms and prescribed Risperidone – an anti-psychotic medication. Within days, her hyperactivity died down and she became confident, outgoing, and independent.”

Dr Ohene works at the School of Medicine and Dentistry at the University of Ghana and sees patients at North Ridge Clinic a few days a week.

But the calm was short-lived. Jayne finally received a formal diagnosis when the pair returned to England some weeks later. Ann-Marie was diagnosed with early-onset psychosis and her Risperidone treatment was replaced by three anti-psychosis drugs instead. But within months, her daughter’s erratic symptoms returned and within a year she stopped speaking.

Desperate to find a resolution, Jayne took another trip to Dr Ohene who reinstated her Risperidone treatment. “I think the difference between the diagnosis I had in Britain and the one in Ghana was the focus,” said Jayne. ““Dr Ohene focussed on Ann-Marie’s symptoms, whereas in Britain, because she was taking anti-psychotic medication, this labelled her as a psychosis patient and influenced how she was diagnosed.”

“In addition, there is a lot more red tape in Britain and diagnosis takes a long time, because health practitioners want to be extremely cautious. I believe that is why some people go down the private route to get a diagnosis and turn to the NHS for treatment.”

After further intervention from Dr Ohene and more waiting, Ann-Marie’s condition was thoroughly diagnosed in Britain as Asperger Syndrome in October 2015. Recent research suggests that ADHD can mask diagnosis of Asperger Syndrome and other conditions on the autistic spectrum and is the likely reason for delayed diagnosis.

Now that Ann-Marie’s symptoms have been diagnosed, her condition is under control and her speech is returning, this is helping to bring more routine to Jayne’s household. Ann-Marie has developed an interest in IT and is in the process of starting a college course on the subject. “She is good at it and this area allows her to work independently and at her own pace,” said Jayne.

Jayne is also looking to her future and wants to establish her own charity. “I want to launch awareness workshops, fundraisers and education drives to share the knowledge I have learnt and offer support to other parents,” she said.

One of the biggest issues she has found is the lack of understanding linked to the condition. “Some people can be very judgemental. I have had people tell me that I waited too long to seek help or others that tell me they are praying for her to ‘snap out of it’ and become normal. It can be quite upsetting when people make statements like that. That offends me because I don’t need sympathy.

“The most important thing for me is that my daughter is here, she has her health, she is not bedridden; if she is hungry she can tell me or make something herself. Her situation is not desperate. Sometimes, I forget that my daughter has challenges because she is my child. I wake up and I look after her. I’ve never once cried to God and asked: ‘why me’? She is here for a reason and she is ours for a reason. God never gives you more than you can handle.”

Jayne believes that her positive attitude to life has been her saving grace. “I believe in having a positive outlook and not taking life too seriously. If I didn’t do that, I would have had a nervous breakdown.”

Ann-Marie has also kept me grounded and helped me to appreciate the little things in life. She’s taught me love – even though she has challenges, she will come and hug me, and that is quite reassuring.”

I am a London-born writer and bookworm originating from Ghana. My name is Abena Sɛwaa but I’m also known by the nickname MisBeee. I launched MisBeee Writes in 2013 as a way to record thoughts that (at the time) had no public outlet. The blogspot took on a life of its own and became my way of recording the inspiring stories of everyday people; keeping a timeless record of cultural events and opinions from Africans in the Diaspora. The site focusses on health, culture, the arts, business and society, and explores how Africans are shaping and disrupting conventional thinking and discourse in these areas. View all posts by misbeeewrites