Ever considered jogging and picking up rubbish at the same time? It might sound odd but this activity – known as Plogging – emerged in 2016 and is fast becoming a craze across the world, particularly as the global attention on plastic pollution intensifies.

Derived from the Swedish words ‘plocka upp’ to pick up, the activity aims to encourage community action on keeping public areas clean but also has health benefits associated with it.

Its popularity has brought the trend to Accra streets with the formation of Plogging Ghana in July 2019!

Keeping Ghana’s streets cleaner is even more pertinent when you consider that its capital – Accra – has the highest pollution ranking among the top ten African countries with the highest cost of living, according to details from the World Health Organization ((WHO).

Pollution from littering remains a particular problem in Accra where litter combined with flooding problems in the city has resulted in a recent cholera outbreak, and people losing their lives, their homes and livelihoods.

MisBeee speaks to Justice Osgood Appiah, the leader of the Plogging Ghana team to find out more.

Hello Justice! What is plogging and why have you and your team taken up such an unusual pastime?

The plogging movement was started by Erik Ahlström in 2016 after he became frustrated by the amount of litter he was seeing while riding his bike to work. So he just started picking it up. It started a trend with others joining in, that turned into plogging runs and now it has become an official fixture within Sweden with over 40 countries elsewhere participating in the trend, including Ghana.

We believe this is a feel-good way to make a direct impact in our community as well as keeping healthy. We believe it’s about time we took the responsibility as a people and be part of the solution to our sanitation menace. Our vision is to make Ghana rubbish free and a country to be proud of.

What are the trash challenges that Ghana faces at the moment and how is Plogging Ghana attempting to tackle them?

The last time I checked, our beloved country Ghana was ranked the seventh dirtiest in the world by the World Health Organization, and plastic waste as well as others we generate from our homes and workplaces contribute greatly to generating filth. We believe that there are better ways of managing waste; perhaps a ban on single-use plastic, penalties and fines for people that litter, and that one plogging rule: ‘throw away or recycle, the trash you collect (whichever is appropriate).’ 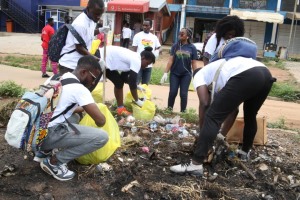 Where in Ghana does this activity take place – ie – across the country? And what areas of cities and towns – ie by beaches?

For now, we basically plog in Accra because of a lack of adequate resources to cover a wider area but we plan to roll out this activity across the country.

If you are picking up rubbish and at the same time jogging that must be a difficult thing to maintain because your running won’t be consistent and eventually your rubbish bag will be full.

Picking up trash and jogging is a bit hectic but that’s one of the reasons why we embark on this exercise. The frequent bending and the random picking up ensures you burn a lot more calories. On average, jogging burns 270 calories in 30 minutes, while plogging can burn 330 calories in the same half-hour period.

It appears to be cultural for people to throw their empty water sachet bags or other things after they have used them in Ghana. Will plogging only encourage them to continue, knowing that someone will be picking up their rubbish?

We believe the plogging movement is not just a physical activity but also a way of creating awareness about the dangers of our unsolicited littering. The team is keen not to lose sight of the education and awareness bit.

What do you do with the rubbish once it is collected? Do you recycle?

Yes! we recycle. We have one waste management firm partnering us and we wish to have as many as possible come on board as we collect more litter. 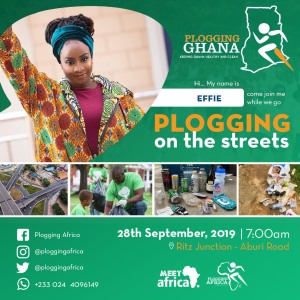 Do you have any Ghanaian celebrities and important figures that plog or have plogged with you?

When is your next plogging event and where can people interested in plogging find out more?

Our next plogging event will be in November. But for more information, follow us on Facebook – Ploggingghana