The second half of my 2019 was dominated by music, learning about shea butter production, a new environmentalism craze and becoming a magazine publisher – all massive learning curves. And just as the year started on the topic of the Year of Return, this initiative closed the year with the launch of a lively debate on the politics of the year-long campaign. Keep reading to find out more. Below is my summary of those monthly highlights listed in the Ghanaian language Ewe. In previous years, I have listed them in Ga and Twi.

My fridge freezer made its debut on a London theatre stage in Siamlɔm (July). I was chuffed because I was moving house and did not want to add to the mountains of rubbish that ends up in landfill already. In my effort to be green, I managed to use Freecycle, Freegle, Shpock and other avenues to sell, and donate my stuff – thus reducing the impact on the environment (hopefully). You can read more on how I achieved that through my piece: Finding a good home for unwanted clutter.

In Deasiamime (August), I launched the AKADi Magazine – a quarterly online publication designed to connect Ghanaians in Ghana and those in the diaspora through the sharing of inspiring, informative and illuminating personal stories. The first issue features Tabom descendent Kai Lutterodt and probably marks one of the earlier examples of Africans returning to their homeland in and around 1835.

The magazine is evolving all the time and started out as an idea in February to create a souvenir issue of some of my blog content. It has since evolved and two issues have already been published as digital and PDF versions, with a third on the way. Check them out here: AKADi.

Random bumping into people is good because sometimes you meet people you admire. That’s how I met Kwame Kwaten in Anyɔnyɔ (September) – one quarter of the 90s British acid jazz group D’Influence.  I had organised an interview with him 20 years earlier and never got to the point of publishing the article. Meeting him gave me fresh incentive! I also got this awesome picture with him and free tickets to see the band perform again! You can see clips of the performance and the time I met D’Influence’s Kwame Kwaten…. 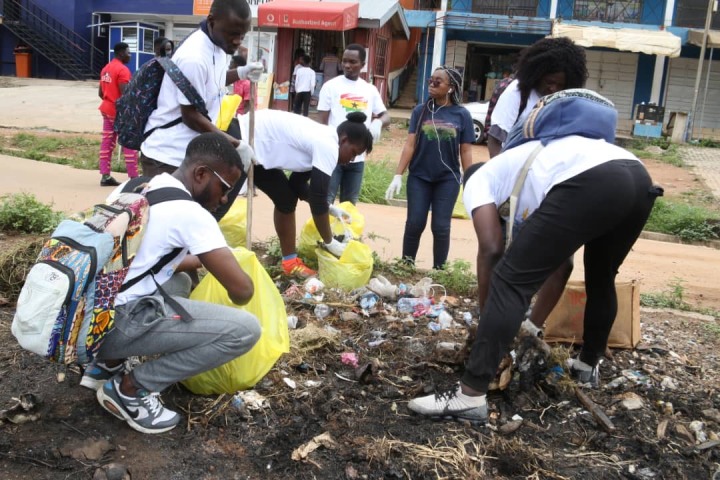 I had never heard of plogging, until I came across a Ghanaian organisation in Accra that is promoting the activity. Plogging is the act of jogging and picking up rubbish simultaneously. The phenomenon was started in Sweden and has gathered momentum since with cities across the globe adopting it. Find out more on Talking trash about Accra’s new craze – Plogging in the link I published in Kele (October).

It has definitely been a year of meeting celebs and the piece de resistance has to be meeting the legendary highlife Golden Voice of Africa – Uncle Pat Thomas. At 72, this guy has dynamite energy and was so kind and gracious to let me interview him at London’s Jazz Cafe. Check him out in concert and also my heartfelt post, in  Adeɛmekpɔxe (November), to the guy that shaped my love of highlife in the post: Pat Thomas and the power of highlife.

And if you love shea butter, I shared a piece written by Habib Haruna ceo of Tamale-based NGO Pure Trust Social Investors Foundation (PTSIF), which highlighted some of the challenges facing shea producers in northern Ghana. I had no idea that shea is the only internationally traded cash crop from Africa’s shea belt that rural women still hold the indigenous processing expertise in. I also did not know that their livelihood is under threat. Read more on this post here: Safeguarding the livelihoods of Ghana’s rural female shea nut producers

Coming full circle from the start of 2019 when I attended the Year of Return press conference in Accra, I co-organised an event with ethical and political clothing line SassyApparel UK in Dzome (December). The discussion sought to explore the merits of the year-long campaign. Designed to encourage children of the diaspora back to Ghana, the initiative has polarised opinions with some questioning its real impact on the lives of ordinary Ghanaians. The speakers to the event and the reasons for the discussion – entitled: A Conversation on the Politics and Realities in Ghana and the Year of Return were streamed live via Facebook. Please check it out and add your thoughts to this conversation.

Happy New Year and thank you for continuing to follow my blog. I hope you will continue to follow more posts in 2020!